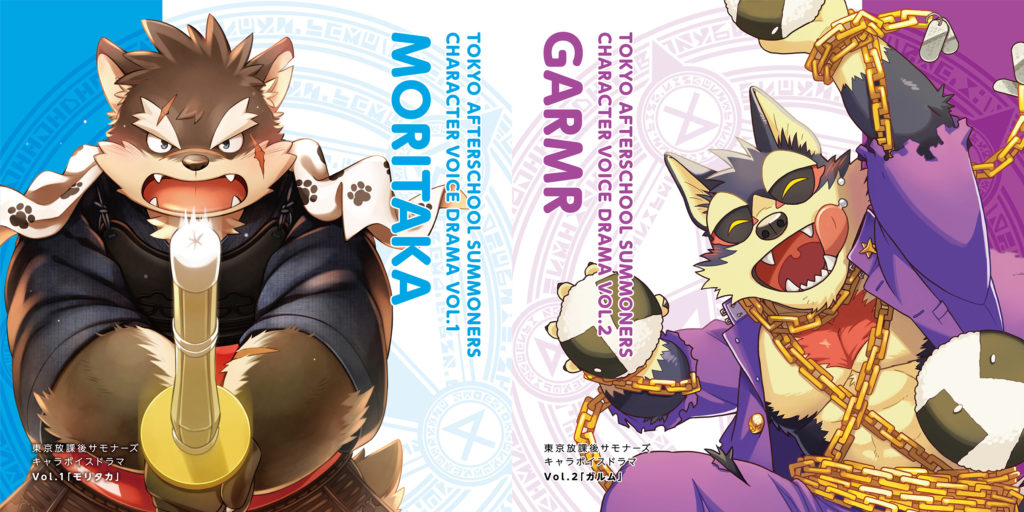 The CD press version of Character Voice Drama Vol.1 "Moritaka" & Vol.2 "Garmr" will be on sale!
With a jacket drawn by Jiro Kinoshita amd gamma,
Enjoy the world of Tokyo After School Summoners which is different from the game!

A voice drama CD featuring a story based on Garmr's character quest, from Tokyo Afterschool Summoners, a game for the LGBT community.
Vol.1 "Moritaka"... One morning, you cross blades with Moritaka, who was training behind the Kendo dojo...
Vol.2 "Garmr"... Wanting you to accompany him somewhere, Garmr asked you to meet him one day. However, you soon find yourselves surrounded by a group of troublemakers...

The digital version is currently under preparation.
As soon as details are decided, we will announce it on the official website, Twitter and Facebook.
Thank you for your patience.

We asked the voice actor of Vol.1&2 what they thought with recording the voice drama Vol.1 & 2!

●山口勝平 (Inutsuka Shino / Moritaka)  Twitter
Since the games are recorded one by one, I can record with Mr. Onami and Mr. Iwanaga this time, and I think that Moritaka in my mind was being so vivid.
Dear Summoners, thanks for your love with little clumsy Moritaka!

●岩永悠平 (Garmr / Kengo)  Twitter
Your passionate support has brought "Tokyo after school summoners" to the world of voice drama CD!
Thank you very much! Please enjoy the time with Garmr and Moritaka!

●大浪嘉仁 (Andvari / Ryota)  Twitter
I was happy to record with everyone! !
I hope everyone will feel Throb and excited through Ryota and Andvari! It's a big deal!